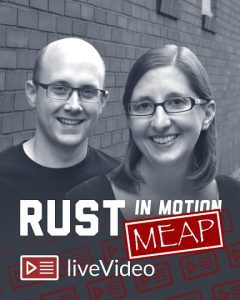 Rust’s popularity is surging among systems programmers. Aiming to be an alternative to C and C++, Rust’s extraordinary speed comes largely from its memory safety, which it achieves without resource-greedy garbage collection. Other enticing features of this hot systems programming language include its rich type system, heavy functional programming influence, and freedom from a runtime requirement. Command line applications, networking, embedded services, and WebAssembly are some of the areas where Rust really shines!

Rust in Motion is an all-access pass to Rust, brought to you by top authorities on the subject. Carol and Jake’s masterful instruction jumpstarts your learning with a spotlight on what’s different and special about Rust! This skilled duo challenges you to dig deeply into the nuts and bolts of variables, primitive data types, functions, control flow constructs, defining enums and structs, and adding behavior to them with methods. You’ll learn memory management via ownership and borrowing, techniques for error handling, lifetime annotations, and other unique Rust concepts. With this liveVideo’s code examples, inspired by real-world scenarios, you’ll be ready to hit the ground running!

Perfect for programmers with experience in a language like Java, JavaScript, Ruby, or Python.

What you will learn

Carol Nichols co-authored The Rust Programming Language and is a member of the Rust Core Team. Jake Goulding is the creator of The Rust FFI Omnibus, a member of the Rust Infrastructure Team, and the top contributor on the Rust tag on Stack Overflow. Together, Carol and Jake cofounded Integer 32, the world’s first Rust consultancy.